Boiling water can be what is between you and your next meal. When you need boiling water most, the last thing you want to do is to wack out a full gas stove.

When hiking, you need hot water for food quickly, it could be your saving grace.

What Does The Jetboil Do?

Maybe you have reached the top of the mountain and you want to celebrate with a cup of hot joe, or maybe you are embarking on a mission that spans over a day and you need the means to make food fast.

This is what Jetboil engineers their products for: speed. In most camping or hiking situations, if you were to attempt to boil water you will need some form of gas stove. 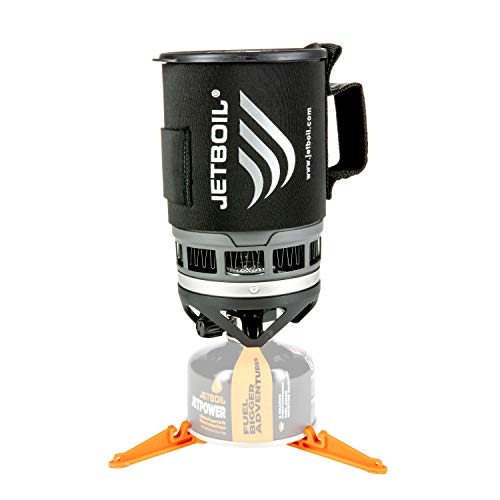 Historically, not only are gas stoves heavy and annoying to carry in your bag, but they often take a lot of set up and can often take a while to boil water.

Both Jetboil’s Zip and Flash products are super quick ways to boil water. They both aim to be lightweight, easy to pack and carry, and ultimately their main goal is to boil water in under 2 minutes 30 seconds.

In the home, it can take anywhere between 5 – 10 minutes to boil water, even with a gas stove, so Jetboil can seriously save time and also pack weight.

Certainly, one thing that may be on your mind, is how much water can these tools boil at one time.

Sometimes you may be with more than one person who needs water, or maybe you want the optimal amount of water necessary for your solo trip. 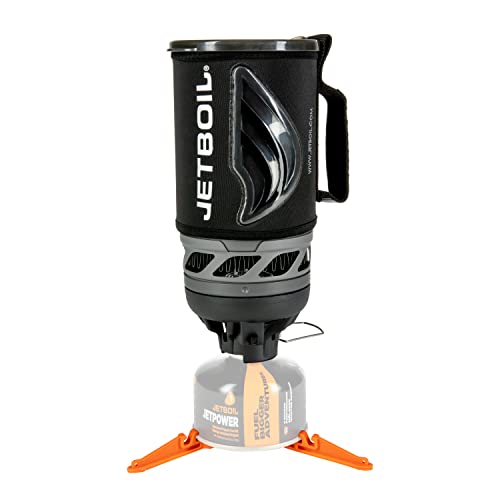 The Flash can hold 0.2L more than the Zip, this can mean the Flash is better suited for larger parties as more water can be made.

On a solo expedition you may not need more than 0.8L of water at one time, so this could be ideal.

While the Flash can certainly hold more water at one time, considering they both boil water in under 2 minutes 30 seconds, there’s no reason you can just fill it up and go again once you’ve used the water.

While the Flash can hold an extra 0.2L of water, this adds almost 4 ounces of weight to the Zip. 4 ounces can be a serious addition to your pack weight for not that much extra water.

Moreover, we pointed out that you can easily boil the Jetboil Zip twice in around 5 minutes and have more water than the Flash while having a pack that is lighter by 4 ounces.

It doesn’t matter how heavy or how much water this can hold when you can’t ignite the gas element when you need it most. Then it’s just dead weight in your pack.

This can be a point of difference between the two products. Namely, while the Jetboil Zip requires a lighter, the Jetboil Flash has a self ignite button.

Although, we would highly recommend bringing a lighter just in case the self ignition doesn’t work, and an extra lighter for the Jetboil Zip. 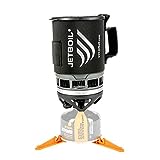 Self ignition sounds really practical and useful, yet, some customers do report that the ignition on the Jetboil Flash might not work so well all the time.

Some customer reports suggest it can go out in high winds and doesn’t work when wet. Some even suggest the button could stop working with over use.

Yet, with the Jetboil Zip, while you may have to carry a lighter with you, most customers report the Zip working nearly every time in terms of ignition.

Considering you would bring a lighter with you when using the Jetboil Flash’s self ignition button anyway, it doesn’t hold much sway over the Jetboil Zip which relies on the trusty lighter.

Both these Jetboil products have a near identical design build. One thing that can be worth a mention is that the Jetboil Flash has a color changing indicator to tell you when the water is boiled.

Is this a gimmick? Considering it serves almost no purpose, perhaps. It’s quite easy to tell the Jetboil is boiling on either model, so this is mainly a flourish on the product.

Needless to say, when you are sitting on the side of the mountain, or having a cup of tea in your tent, watching the colors change can be somewhat mesmerizing.

But beyond light entertainment, this doesn’t add much to its practicality, which is what we are looking for in hiking tools.

One point of difference that could make a difference is the different heat regulators used on the Flash and the Zip.

A heat regulator is really important for a camp stove that is designed to be used in extreme conditions.

The heat regulator allows the gas to heat the water at the same temperature and regularity, no matter what weather conditions you are in, and no matter how much gas is in the container. 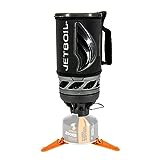 The Jetboil Zip has a rather annoying and badly engineered heat regulator valve. You need to turn this valve to regulate how much heat you require.

On the Zip, this is really small and is made from plastic. Not only does this seem like it could easily break from a fall onto rocks, it’s also really unergonomic.

Not only is the Zip’s valve really close to the heat source, but it is also a serious pain to turn.

Having something so vital be so small and unergonomic, especially when your hands could be really cold when trying to use this, just makes no sense to us.

Luckily, on the Jetboil Flash, they have solved this problem. The valve itself actually flips out meaning it is nowhere near as close to the heat as the Zip’s is.

Moreover, the big metal wire is super easy to turn, even if you have cold hands. Actually, the metal wire is there so you can turn the valve with a tool if your hand were incapacitated.

If we were in a survival situation, the last thing we would want to do is try to turn the small plastic valve on the Zip, yet with the Flash we could use it no matter what situation we are in.

While both products are fairly similar, it is the small features that can set them apart.

The worst thing about the Jetboil Zip is the heat regulator valve. As mentioned, it can be pretty unergonomic and impractical and is particularly annoying.

This is almost enough on its own to buy the Flash over the Zip.

Saying that, the Zip is a whole 4 ounces lighter than the Flash. For some expeditioners, a lighter pack could be more important than the ergonomics of a valve. This is totally up to the preference of the hiker.

Moreover, the Flash can actually hold 0.2L more than the Zip. We wouldn’t say this is enough on its own to buy the Flash over the Zip as they both can boil water really quickly (in under 2 minutes 30 seconds).

We find that if you want more boiling water for a larger party you can just do two runs. Plus, 0.2L doesn’t make that much difference.

Again, the Flash’s increased water capacity, which could be loved by some, certainly adds unnecessarily to the weight of the item.

The Flash’s most impressive and useful feature that many customers will be grateful for is the new and improved heat regulator valve.

This valve is a lot safer, a lot more ergonomic and a lot more practical. Rather than the increased water capacity, it is likely this component that adds the 4 ounces onto the Flash.

Yet, the Flash has a lot of gimmicky features that don’t add much, such as the color changing light as well as the self ignition button.

While the self ignition button can make sense in theory, in practice it doesn’t add that much to the product, you should still carry a spare lighter for instance.

In summary, the Jetboil Zip is much lighter, and while it relies on manual ignition, many customers suggest it is very reliable.

Yet, it’s impractical heat regulator valve can put many users off and is certainly an impractical feature that prioritizes pack weight over usability.

On the other hand, the Jetboil Flash is much heavier, yet it can hold more water. The Jetboil Flash also has a much more practical heat regulator valve that could save you from a bad situation.

Just expect to add a good 4 ounces more to your pack weight than the Jetboil Zip would.

At the end of the day, your choice is based on preference. If you prioritize pack weight and smaller expeditions, go for the Jetboil Zip.

If you prioritize ease of use and practicality, the Jetboil Flash could be better for you.

Hiking The Alta Via 1 Dolomites: All Your Questions Answered

The Alta Via 1 runs through the center of the Dolomites, but not everyone has heard

The Cotswold Way Walking Trail: All You Need To Know

If you are visiting South England to discover the best its nature has to offer, then

Free for anyone to walk, the Hadrian’s Wall Path is one of the UK’S National Trails

Coast To Coast Walk In England: All You Need To Know