The Garmin Instinct is one of the best hiking watches on the market, with tons of great features.

Here are some frequently asked questions about the Garmin Instinct and its features, with the answers to all of them.

Does The Garmin Instinct Have Music?

The Garmin Instinct hiking watch comes with a whole host of great features and applications. These include apps for playing or streaming music to your headphones.

With 16 MB of memory, you can download your favorite playlists and songs and store them on the watch. From there, you can easily navigate the watch’s menus to find your music and start playing.

You can also link up the Garmin Instinct to your smartphone, and play music directly off it.

The Garmin Instinct is compatible with most types of Android and iOS phones, meaning you can link the watch to your phone and play music at will. 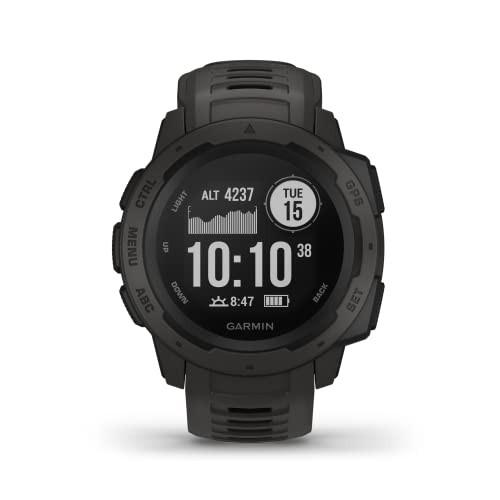 Additionally, you can link the Garmin Instinct to premium accounts on Spotify, Amazon Music, Deezer, and more!

Simply sign in through the app on the watch, and you’ll be able to access your favorite music, playlists, and podcasts to enjoy as you’re hiking.

The watch doesn’t come with any preloaded music, however, and you’ll need to download your own to be able to listen to music in areas without any internet connection.

You’ll also need a premium account on streaming services to be able to link them.

Regular free accounts won’t be linkable, and also can’t save songs or make playlists which prevents offline listening regardless.

That said, the Garmin Instinct’s array of music apps and storage makes it easy to listen to all your favorite tunes while on the go.

How Long Does The Garmin Instinct Take To Charge?

A Garmin watch takes about 140 minutes to charge, or around 2 hours and 20 minutes.

However, when you first open a Garmin Instinct, it will arrive with some charge already on it (typically around 40%).

While you can use the watch straight away, you’re better off charging it as soon as you open it. Despite already being almost half-full, this initial charge will take much longer than usual.

Charging your Garmin Instinct for the first time can take anywhere between 6-8 hours, though after some use it will settle down to the more reasonable 2-3 hours for a full recharge.

You can also get the Garmin Instinct as a Solar model, which has a solar panel built-in that absorbs sunlight and converts it to power. This helps charge the watch faster, and can even replenish some battery life while you’re out and about.

The Garmin Instinct Solar can charge much faster than the regular model, and combining it with a charger can cut the time down to around 45 minutes on a sunny day.

Not only does the Solar model reduce the time it takes to charge the Garmin Instinct, but it also helps extend the battery life significantly.

In fact, you can easily go multiple months without needing to charge the watch as long as you don’t use it intensively and regularly.

Using the simple functions of the watch will mean you rarely have to charge it, with the solar panel doing most of the work.

Using a fast charger will also decrease the charging time for your Garmin Instinct. Depending on the charger you use, the time it takes to charge the watch can be reduced to less than an hour and a half.

Over time, the battery in the watch will degrade. This means that your Garmin Instinct will start to lose charge faster and take longer to recharge.

Older batteries can mean that the watch will take 4-5 hours instead of around 2 and a half, although this will take plenty of time to happen. You can stop this from happening by replacing the battery.

How Do You Turn Off The GPS On The Garmin Instinct?

While the GPS function of the Garmin Instinct is useful for many reasons, you may want to switch it off from time to time.

To do this, you first need to hold down the MENU button. This is the middle button on the left-hand side of the watch.

This will bring up a menu on the screen; from here, scroll using the ABC button (which is directly below the MENU button) until you reach settings.

Select settings using the GPS button on the top-right of the watch, and navigate to activity settings. Select it, and then select GPS from the menu that pops up.

Here, you can select OFF to switch the GPS off. You can switch it back on again at any time by selecting NORMAL (GPS Only) on the same screen, which will re-enable the GPS functions of the watch.

Other models of the Garmin Instinct line can have their GPS functions switched off in different ways.

For instance, the stealth mode of the Instinct Tactical will fully disable all tracking and wireless communications, including the GPS monitoring features.

To do this, hold down the CTRL button to bring up a menu. You can then use the GPS button to select the icon that looks like a stealth plane (a triangular symbol with three points on the bottom face). This will activate stealth mode and switch off the GPS.

Similarly, you can disable the health-tracking features of the watch, which include a pedometer, heart rate monitor, and thermometer.

To do this, navigate through the settings until you reach activity tracking. Enter the menu, and use the GPS button to switch it off. Again, this can be switched back on at any time.

Is The Garmin Instinct Touch Screen?

Unlike other models that Garmin has released, the Garmin Instinct is not a touch screen. To navigate through the watch’s menus, you’ll have to use the buttons around the circumference of the watch face.

There are five buttons on the Garmin Instinct – three on the left-hand side, and two on the right. These buttons are (going clockwise):

GPS – Holding this button down will display your current coordinates, and save your location to the watch’s memory. You can also press it to select options in menus, to view your activity list, and to toggle an activity on or off. The GPS button is on the top-right of the watch face.

SET – This button is on the bottom-right-hand side, and pressing it returns you to the previous screen or menu. You can also hold it down to view the clock menu, where you can set alarms, check the time, and toggle the clock format.

ABC – Holding this button down will bring up the ABC screen, which displays data from the built-in altimeter, barometer, and compass. You can also press it to scroll down through menus and through the widget loop.

MENU – The MENU button scrolls up through menus and the widget loop when pressed. Holding it down will bring up the main menu, which holds all the Garmin Instinct’s many apps and features.

CTRL – Pressing this button will switch the Garmin Instinct on when it’s powered off, and toggle the light on the back of the watch when it’s turned on.

Holding it down brings up the controls menu; this menu lets you adjust the settings and features of the watch, including switching on Do Not Disturb mode, making phone calls, and turning the Garmin Instinct off.

While using the buttons on the watch may be more confusing than a touch screen at first, they are simple enough to learn and it won’t take long before you’re navigating the menus with ease.

VO2 max is usually measured during incremental exercises (in other words, short repeated exercises with increasing levels of intensity), where your maximum oxygen consumption is used to improve the amount and intensity of exercise you can achieve.

The Garmin Instinct doesn’t have VO2 max built-in, and there isn’t any way to install or download it as an added feature.

This makes measuring incremental exercises redundant as hiking is a prolonged and inconsistent form of exercise.

You also want to avoid using large amounts of oxygen or performing bursts of energy while you hike, so there is little need for measuring your maximum oxygen consumption.

Other models such as the Garmin Enduro and the Garmin Forerunner include VO2 max either pre-installed onto the watch or available to download.

While the Garmin Instinct isn’t compatible with VO2 max, there are plenty of other health-tracking apps and features built-in to the watch that will help you monitor your stats and keep track of aspects of your health that are more closely related to hiking.

What Is The Difference Between The Garmin Instinct And The Instinct Tactical?

First, the Instinct Tactical brings a wide assortment of new features that the original Instinct lacks.

These include stealth mode (which turns off the watch’s tracking and wireless communication features), Jumpmaster (which follows military guidelines for calculating the high-altitude release point, or HARP, and monitors skydiving), and waypoint projection (which lets you create a waypoint for a new location, with its distance and bearing calculated based on your current position).

The Instinct Tactical is also compatible with night-vision goggles, and has preloaded tactical activities that let you use dual-position GPS formatting and keep track of your position.

Design-wise, there aren’t many differences between the Garmin Instinct and the Instinct tactical. They both have the same buttons in the same positions, and the face, strap, and body of the two models are almost identical.

The buttons are a bit chunkier and sturdier, tying in with the watch’s overall tactical-themed design.

Is The Garmin Instinct Tactical Waterproof?

The Garmin Instinct Tactical isn’t completely waterproof, but it is water-resistant and can withstand underwater pressure of up to 100 meters.

In fact, it is recommended that you wash the barometer port in your watch with warm soapy water from time to time. As long as the watch is rinsed well, it won’t suffer any negative effects from being washed or submerged.

Don’t leave it in water for too long, however, as you’ll end up damaging your watch. That said, you don’t have to worry about the electrics in the watch getting damaged or shorting out just because the watch gets wet.

The Garmin Instinct Tactical is built to last, and there are plenty of other features that make the watch incredibly durable and capable of withstanding the rugged wilderness.

The Instinct Tactical is built to a U.S. military standard, featuring a chemically strengthened scratch-resistant display and a sturdy silicone band.

In addition to being water-resistant, the Garmin Instinct Tactical also meets the military standard 810 for shock resistance and thermal resistance.

With its durable materials and high-quality functions, the Garmin Instinct Tactical is an incredibly durable watch that will last for years.

The Garmin Instinct and the Instinct Tactical are both great models of watches that are well-suited for all your hiking needs.

We hope that this article has answered any questions that you may have had about the Garmin Instinct and its features, as well as given you some more information that you might not even have considered yourself.

Tour Du Mont Blanc: Our Epic Guide To All You Need To Know

Hiking The Alta Via 1 Dolomites: All Your Questions Answered

The Alta Via 1 runs through the center of the Dolomites, but not everyone has heard